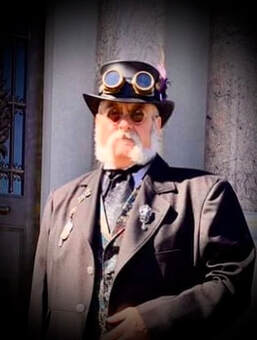 Founder and Owner of The Steampunk Consortium as well as The Muncie Indiana Steampunk Society.
Chief Magistrate of the Steampunk Consortium.
​
Doctor of Metaphysical Sciences, Spiritualism Enthusiast, Steampunk Ambassador.
Dr. Ghinton has a lifetime of fascination with all things which "go bump in the night", of the ghostly kind, not the other. His fascination has led him into many dark corners, and given him more questions than answers to the source of those unscrupulous creaks and shrieks often associated with the seance or the haunting of one's abode or business.
His scientific pursuits have opened his mind to entertain and speculate upon the stories of others. He is ever seeking to learn more of the adventures and experiences of his fellow man, and to seek out and investigate those odd occurrences to discover whatever may exist behind the curtain.
He is able and willing (with, or often without prompting) to graciously share his opinions and observations on the subjects of “Life Beyond The Flesh”,
“The Transition”, “Energy— Origin & Destination”, “What is Spirit?” and many others in a variety of venues and circumstances. 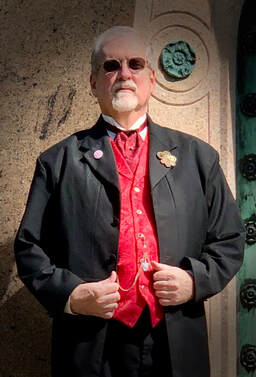 Prof. Garrick H. Foxx
Prof. Garrick H. Foxx  (aka Gary Jeffers)
​
A Practitioner of the Visual Arts and sometime Philosopher of Cosmology, Ontology, and Phenomenology
More recently, a traveller from an unspecified (and perhaps unknown) location, possibly renowned for allegedly controversial philosophy.
"As a result of a recent portal calibration mishap, some of my non-corporeal components (e.g., memories) may have been delayed, rerouted, or become otherwise temporally unstuck. I am greatly indebted to Dr. Derwood Ghinton, longtime traveling companion, who is kindly assisting me with this issue." 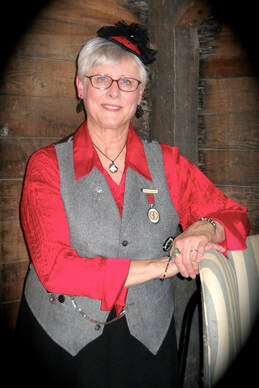 ​While most Victorian women are to be biddable and expected to be ignorant of intellectual opinion, Lady Fay is not your average lady.
Not a hot house flower she likes adventure and stimulating discussions on subjects concerning the cares of the world and its people
Creating pleasing visual images of nature, animals as well as people is a passion, so expect to see her with a camera within reach. 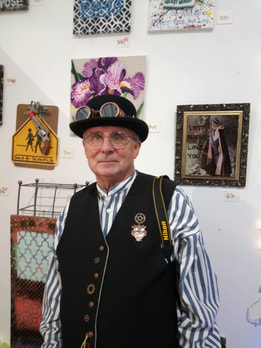 Chauffeur by hire and LTA craft enthusiast.
Working on a steam powered directional device for the lighter than air craft for human flight and transportation.
He thinks that LTA craft is going to work better than the onothopter plans proposed by the Hays Brothers. He recognizes Captain Steve Hays work and skill as a designer but is certain that LTA is more effective and stable. 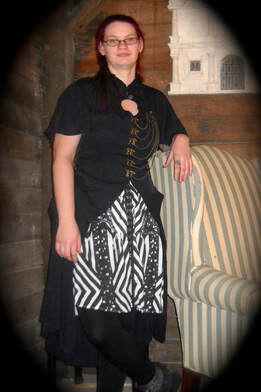 I’m a adventurer and world explorer.
I have used all forms of transportation for my travels including aviation, train, ship, and of course time. I love to find new places to explore like far away castle ruins, old abandoned buildings, and all forms of the wild ( I especially love the deep dark forests)
I like to explore the landscape as they are currently, then use my Time Compass to go back and see the places I find in all there former glory. 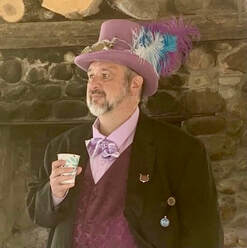 ​A gentle caretake of the Ebony Mansion, his home and place of employ. Directed by Bishop Twilight, who is a mysterious and aloof dispenser of instruction into Mr. Hydes world.
Mr. Hyde is a third generation employee of the Bishop. Paying off a long standing debt which is not discussed in the public eye.
Ebony Manor is a spectral location found between realms. Not in the land of the physical and yet not in the aspect of the metaphysical. It is designed to house, and contain those beings and creatures which do not belong in the world of the Mundane. It is not a prison, but a refuge from those who would cause harm to the mysterious beings often brought to the manor for safe keeping.
​Mr Hyde is the caretaker of these entities. Gentle by nature and understanding.
His tasks often involve lengthy travel outside of the manor in search of new “residents” and his commission is to return those he comes into contact with back to the manor.
Never underestimate Mr Hydes point of observation, he may seem like a simple being, but his insight and strengths are many. He keeps with him 3 keys. Each on for a different task.  One will open a dimensional vortex leading back to the Manor. One will open a vortex to safely carry whom ever passes through back to the last place of safety. And the final key is unknown and comes with the warning to never use, unless told explicitly to do so.
Mr Hyde also is a collector of unique equipment. He often carries a small vial of what appears to be sand, and yet upon agitation of the vial, it glows brightly.  He has come by this artifact by collection what he refers to as “fairy dust” from key members of the Manor Residents. 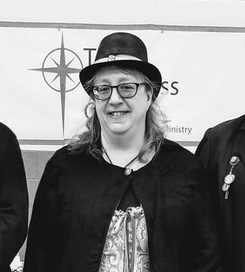 Ms Abigail Watson
Ms Abigail Grace Watson  (aka Wanda Delaney)
​
My name is Abigail Grace Watson.  I was born with a curious and questioning mind...what some might refer to as nosy...but to each his own.  I am often found off to myself, studying the minute details of a scene.  I am deadly with a pistol and mine is never far from my side (my left side, to be exact - which often throws off the villains that would accost me - much to my infinite amusement).  Always being fond of science, I keep at ready an arsenal of elixirs, herbs, tinctures and poultices that are helpful in most situations.  My journal is my constant companion and I keep a thorough record of everything that I encounter.
I am currently a detective/adventurer who joined S.T.E.A.M. (the Society of Time Travelers, Explorers, Adventurers and Mystics) in their quest to rid the world of those beasties that some dare not even whisper about. 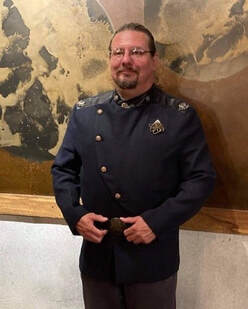 ​Federation of Sovereign Nations Personnel File 2866:
DeLatoche, Adrian M.
Captain: FSN Andrade
SRVC # 5150OU812
Commendation Golden Trident for conspicuous bravery and valor.
Awarded Navy Cross
Several Good Conduct Ribbons for outstanding leadership.
Commendation Golden Trident for the Daajarhi Maneuver at the Battle of Tareg.
Captain Adrian DeLatoche had already racked up a storied career above and below the waves before being recruited into the newly minted Federation of Sovereign Nations Naval Division after the Treaty Of Aerobend, that created the Federation, giving the member nations a cohesive yet independent unification of stable and progressive countries. It's mission; to defend and protect land, sea and sky from threats on a global scale.
Serving aboard a few different vessels during key conflicts contributing to the rise for a need of the federation. As he was an already brilliant engineer, also serving in various positions in the engineering and sciences departments where proving his metal in solving difficult problems and anticipating the needs of his superiors, he was asked to partner with Nikola Tesla in order to design and build the FSN Flagship, Andrade. The world's first giant Deep Sea Submersible, all about dwarfing the conventional submarines and warships of its time. It's shape of which resembles a Squid complete with tentacular arms designed to move independently or in conjunction depending on need of speed or maneuverability.
A warm, friendly and compassionate sort, yet hard set with determination ,bravery, dedication and discipline. Ready to take on any situation put in his path, lifting up his crew and confident in their ability to handle their duties. More than capable in his capacity to command. Sharp of wit and long on charm, he prefers to lead by example and is unfailing in his loyalty to his ship and crew as well as those close to him. His shipmates are as equally loyal to him. Integrity, balance and forethought makes him stand out in his service.
End of File.